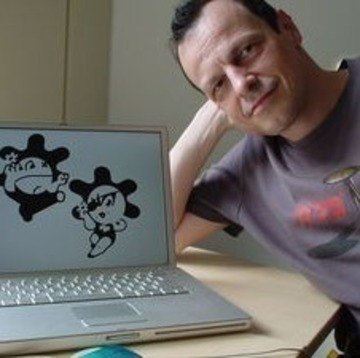 Joachim Müller-Lancé (German, born 1961) studied Graphic Design at the Basel School of Design in Switzerland and Fine Arts at the Cooper Union in New York. At The Understanding Business in San Francisco he developed information design for the Pacific Bell Smart Yellow Pages. As an independent designer in Barcelona, Joachim designed exhibitions for the 1992 Olympics and taught at the Elisava School of Design. After an intense and prolific tenure as art director at Barclays Global Investors in San Francisco, he opened his own studio Kame Design, creating identities, information design, typefaces and mascots for clients such as Wired, Samsung, Bank of America, Panasonic, Reebok, Pentagram and Organic.

Joachim has designed 17 typefaces with 48 styles, including a 20-style corporate superfamily with almost 20,000 glyphs for Sony Ericsson. For both his Latin and Kanji designs, he received 4 prizes from the Morisawa Awards including the Gold Prize for his Lancé family, as well as 4 awards from "bukva:raz!" by ATypI/UN, and a nomination from the Tokyo Type Directors Club. He has written, taught, lectured and juried in several continents and can be found in over 20 design books. When he is not busy with type, he likes playing drums in his band, traveling, taking pictures for his Pecha-kucha presentations, practicing Krav Maga or learning Japanese.