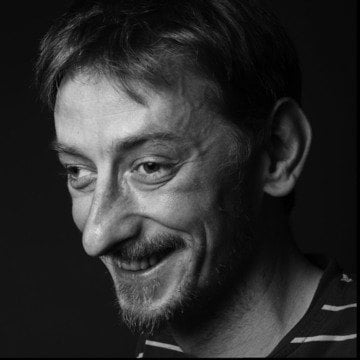 Lukasz Dziedzic was born 1967 in Warsaw. Rather than to finish high school, he worked as a sound technician, actor, carpenter helper rebuilding 13th-century churches, singer/bass guitarist and software developer at the Polish patent office. During the first free Polish elections of 1989, he briefly worked as a newsboy for Gazeta Wyborcza, the newly-launched, first independent daily newspaper in the country. A year later, he joined the design department of Gazeta Wyborcza and spent seven years there, co-creating the layouts of the main newspaper and its weekly companion magazine, for which he drew his first typeface. He later worked for several other publishing houses in Warsaw, designing newspapers and magazines. At the same time, Lukasz drew over a dozen typeface families ranging from large Latin and Cyrillic text families to single display styles.