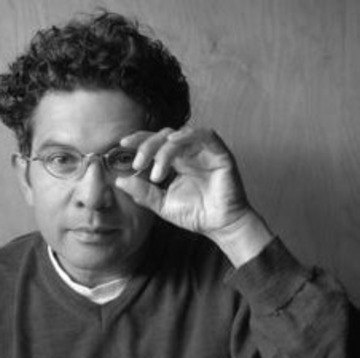 Max Kisman graduated in 1977 in graphic design, typography, illustration and animation at the Rietveld Academy in Amsterdam and started his own business in graphic design and illustration for various publishers, institutes and museums. Pioneered with digital technology in the mid 80s for magazine design, images and typography (Vinyl Music magazine, Language Technology magazine), posters (Paradiso Amsterdam) and the Red Cross stamps for the Dutch Postal Service. In 1986, he co-founded TYP/Typografisch Papier on typography and art. In 1989 he was honored with an individual grant from the Foundation for Fine Arts, Design and Architecture, The Netherlands, to explore aspects of personal ‘Visual graphic symbolism and iconography’. Worked and lived in Barcelona from 1989-1992. Besides explorative painting and various art projects and installations, he digitized various typefaces for FontShop International. Between 1984 and 1988, he taught graphic design and typography at the Gerrit Rietveld Academy, College of Arts and Crafts in Utrecht, and the Post Graduate Jan van Eyck Academy in Maastricht. From 1992-1997 he was chief graphic designer for VPRO television in the Netherlands. In 1994 he became involved in interactive media for VPRO-digital and HotWired. In 1995 he received the Award of the public in the Design Awards of the City of Rotterdam for his television graphics for VPRO tv. In 1996 he received the prestigious H.M. Werkman Award for graphic Design from the Amsterdam Foundation of the Arts for his television graphics in 1996 for VPRO TV Network. In 1997 Wired Television in San Francisco hired him as art director. Currently he lives in Mill Valley, California. He works for various clients in the US and the Netherlands and teaches graphic design, motion graphics and animation at the College of Arts and Crafts in San Francisco and typeface design at the Extension of the University Berkely in San Francisco.